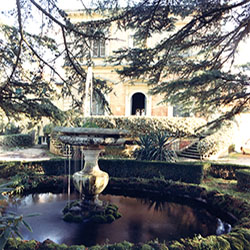 The architectural complex of Villa Paolina is made from the core of the aristocratic villa with its annexed  building services and the courts, and a park of about 10 hectares, among the most important of Umbria for the boulevards and historic gardens which includ, and for the variety, the greatness, and the age of the present plant species. Known in the sixteenth and seventeenth centuries as Villa of the seven Cardinals, the complex assumes the characteristics of a true aristocratic residence around 1706 by the initiative of Giovannni Battista Gualterio, son of Stanislaus (1628-79) Marquis of the Corniolo, which will reside there with his wife, the noble woman Giulia Staccoli of Urbino. In 1720 he will be hosting a guest among the most illustrious, James III Stuart, pretender to the throne of England. The brother of John the Baptist, the wealthy, cultured and powerful Cardinal Filippo Antonio had close contacts and links with the Stuart family since, as apostolic nunzio in France, in 1700 he met James II in exile in Paris, and then, had been one of the strongest supporters of James III and his group, so that was appointed by Pope Clement XII patron of England in 1717. In that year, the royal exile had come to Rome, initially guest in the palace of the Gualtiero's until, thanks to the income assigned by Pope Innocent XIII through the intercession of Cardinal Filippo Antonio, established his residence in the Muti Palce in Piazza Santi Apostoli in Rome. 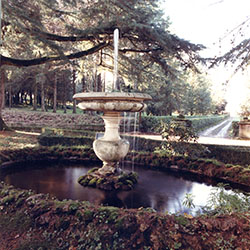 In 1719 James Stuart got married with Princess Maria Clementina Sobieski, grandson of King John III of Poland, remembered as winner of the Turks at Vienna in 1683. The royal wedding, wanted by Pope Clement XI and already contracted by proxy, were truly fantastical, to mock all of Europe worrying that the attempt of the Papacy to overthrow the reigning King George of Hanover in favor of the pretender Catholic, attempt culminated in the failing expedition in the UK of Spanish troops to help with Scots to accomplish the restoration of the Stuarts. The marriage was celebrated in the Apostolic Palace of the nearby Montefiascone , whose seminar at that time was the nursery of English Catholicism. It is explained by this close relationship which the noble title of Earl of Dundee Scotland in 1705 attributed by James III to Giovan Battista Gualtiero, as the tombstone in the family chapel in the Cathedral of Orvieto remembers.

And it is also understood the stay of the sovereign in the house of of Porano, then called Villa del Corniolo for the noble title of Gualtiero, who will have the unique opportunity, made available to the distinguished guests, of the delights of its gardens and the elegance of the frescoed rooms. Just to the structure of the eighteenth-century refer the long avenues that lead into the agricultural property and places devoted to hunting both inside and outside of the park, the formal italian gardens and the  Late Baroque fountains. 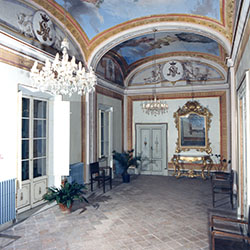 In the following century, the Villa lived a new phase of splendor, was the favorite residence of the Marquis Filippo Antonio Gualtiero (1819-1874), an eminent politician in Italy in the risorgimental  and neo-unitary Italy. Committed before as part of the reform movement neo-guelph and giobertian, then, after 1860 the Gualtiero was elected deputy in that year within the  conservative movement ricasolian. It was first Prefect of Perugia, then of Genoa, Palermo and Naples; After he became senator in 1861 was called to the government in 1867 as Minister of the Internal Affairs and finally he was Minister of the Royal House, when his political career was well on its way to a rapid as well as irreversible decline. Among his interests were also historical studies, some of which dedicated to the history of the Orvieto events that had the opportunity to investigate  at a young age  while he was a municipality clerck. Along with the city palace in Orvieto, the Villa also hosted the family art collections accumulated since the eighteenth century, especially by the Cardinal Filippo Antonio, excellent connoisseur and well educated passionate. But the era of Gualtiero ends immediately after the Unification of Italy: in 1874 the Villa of the Corniolo and other family properties were sold, and passed into the hands of the Marquis Viti Mariani. From then it will be called Villa Paolina, in honor of the new owner, the Marquise Paolina. It is  at this stage of the nineteenth century that major changes were made to the gardens and to the interiors of the Villa, which gradually assumed its present form. 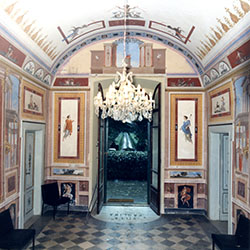 During the twentieth century, a last step has made the villa owned by the Province of Terni that granted it by virtue of a Convention, to the National Research Council as a venue for research activities of the Institute of Agro-environmental and Forest Biology (IBAF). The Iinstitute  carries out experiments and research in ecophysiology, plant ecology, genetics, forests and forestry. An area of the park is an integral part of the studies on forestry. A project of some years ago, developed by the Institute in collaboration with the University of Viterbo, provided for the conservation and regeneration of the plant species historically present in the garden and for its future opening to the public. In recent years, the Province of Terni has concluded a project of restoration and renovation of the architectural complex together with CNR and of the Park recovery. The interventions made so far have covered the Italian garden and the four fountains, with stucco work and decorations but also the tree species to return to the ancient landscape characteristic of the Park. Finally, the restoration of the limonaia has created ya functional structure that will host educational services for the reception of visitors and the management of new initiatives.